​At the age of 11 years, in 1971 in Durban, South Africa, I (Arnold) attended a Gospel crusade where Cliff Richard sang and testified about his conversion in finding Jesus Christ as his Lord and Saviour. The Holy Spirit convicted me very powerfully that I wasn’t saved (that I didn’t know the Lord and that He didn’t know me) and that I was on my way to damnation. I was devastated!

One night, shortly after that crusade, God heard my plea and entered my room with a tangible presence. I didn’t think twice but invited Jesus into my heart as my personal Saviour. I immediately felt him entering my whole being, filling me from the top of my head to the bottom of my soles.

Origin of Amazon Missions
At the age of 33 Arnold felt challenged by God to start reaching out to some of the last and most remote unreached people groups of our day, the Amazon Tribes. He started travelling to South America and the jungles of the Amazon region in 1993 and still does today.

It all really started after travelling overseas with his parents. He noticed that most people would more likely visit all continents except South America. This intrigued him and he discovered that:

1. The average person is bent on comfort and doesn’t like to venture into areas that demand more sacrifice than most. 2. Unless there are profitable reasons for entering a challenging and unconventional area, most don't go there. 3. As a result, many people groups within the Amazon region have never been in contact with western cultures, let alone ever hearing of Jesus Christ, their Redeemer. There’s no connection between existing global structures and these “stone age” people groups. These reasons ‘cry out for recognition with conviction.’ As a result, Arnold started with field trips to the Amazon Indian Tribes.

At the age of 19 years in 1979 and 1980, Arnold fought in a live war as a military soldier under national government law in the Namibian/Angolan war of Southern Africa, 1975 – 89. During this, time of military duty, being a successful leader with rank and authority, he worked towards entering the Military Reconnaissance Unit as a mercenary… But God stopped him! Another challenge was laid in front of him, winning his enemies over as friends, not killing them! This is in exchange for the greatest cause of time, that all could come to know Jesus, the Christ, as Lord and Saviour and spend eternity with Him. After an intense struggle with God, he was challenged to trade his rifle in for the Bible. Then, as mentioned, in 1993 he answered God’s call to go into unconventional areas like the Amazon Jungle. He believes this to be one of his God ordained purposes for life. Today Arnold strategises for Jesus Christ, giving people hope in unconventional areas and a chance to eternal salvation, bringing the light of Jesus Christ. He feels compelled by God’s love and this is one of many ways in which he can thank God for what he did for us on the cross.

He started working with Brazilian Amazon Indians in cooperation with YWAM and Wycliffe Bible Translators in 1993 and through God’s inspiration learned to speak Portuguese within 5 months. Alternatively he speaks Spanish as the Amazon also shares in part with the Spanish speaking countries of South America where he also works with Good News Mission in Peru. God has blessed Arnold with an alternating ministry of music and where ever he goes, he sings Gospel music accompanying it with guitar. In 1997 he brought out a gospel CD which was recorded in Brazil. It contains songs in Portuguese, English, Zulu and Afrikaans.

Often travelling, he addresses churches, schools, colleges, Christian business people and various groups in other regions sharing the amazing works of what God is doing in the Amazon Jungle. The results of these performances are salvations, baptisms, Holy Spirit infillings, healings, recruitments for missions, deliverances from the occult, deliverances from addictions etc.

Besides knowing the Lord personally over many years, he’s been involved in tertiary training:
a) One year Biblical Studies (University) 1982
b) One year Bible School Training (College) 1987
c) 3 Diplomas with YWAM – (Total 1 year) (Mission) 1990 – 1994

Arnold married Heidi on 2 August 2015. Heidi shares Arnold's passion for reaching the lost and loving Jesus more than anything. 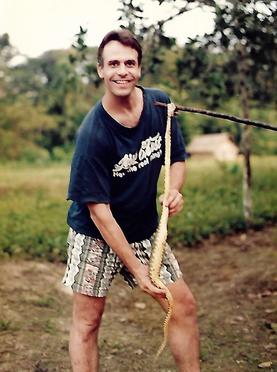 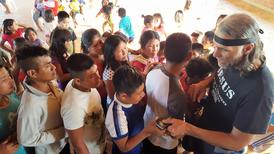 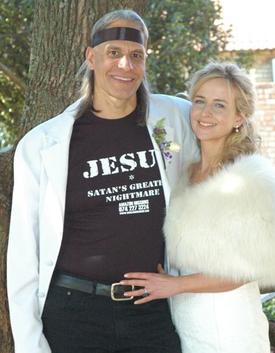 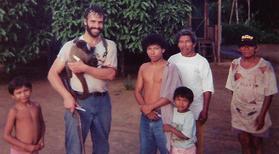